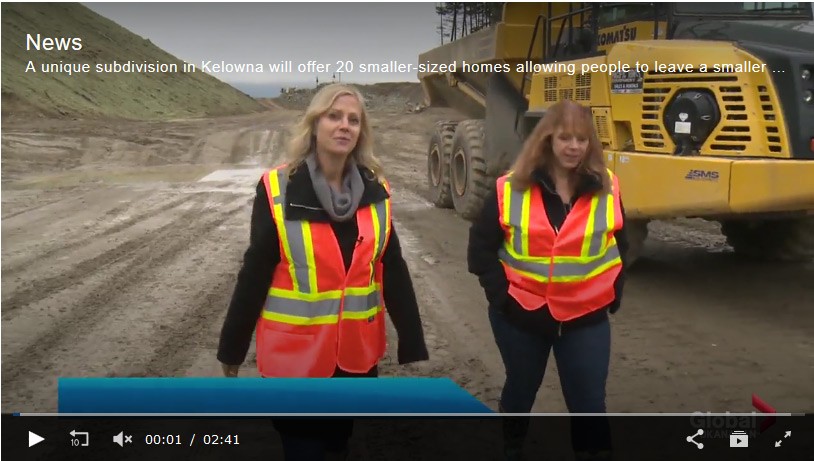 It's a new subdivision that, once complete, will offer 20 smaller-sized homes.

"The houses are between 1,100 and 1,250 square feet," said Tara Tschritter, founder and president of Little House Contracting Corporation.

Called the LIV community, the subdivision will be situated in the McKinley Beach area of Kelowna.

Tschritter said the two-to-three bedroom homes were inspired, size-wise, by the past.

"Back in the '40s, '50s there were a lot of small-home neighbourhoods like in the downtown core that we see, where homes were built anywhere form about 800 to 1000 square feet," she said. "That was actually very typical but now ever since the '70s, '80s '90s, houses just seem to get bigger and bigger."

But she said these days, many people are actually wanting smaller homes.

"It's really been increasing over the past, I'd say 10 years," Tschritter said. "With everything now in the media around climate change and the climate crisis, people are looking at different ways to live and this is a simple way to reduce your impact on the environment."

Proponents and developers of smaller-sized home like Tschritter say there are a number of benefits to living in smaller spaces, including environmental and financial.

"Just having a smaller footprint in general means you're consuming less, you're taking up less land, you're requiring less utilities to operate your house, you are requiring less material to build your house and you don't have to fill it with us much," Tschritter said.

Maureen Grainger is purchasing one of the little houses.

"I'm an environmental professional, I have a master's in sustainability so the development…is in complete alignment with my values," she told Global News.

Grainger will lose about 1,000 square feet when she moves form her current home into the new one.

"The smaller the footprint, the more it resonates with me personally…I love the idea of a community and everybody in that community has the same commitment, solar panels and an EV (electrical vehicle) charger….it is just amazing."

The homes start at $488,000. While the price of these little houses may be lower than the average price of a Kelowna home, it's still on par with what it costs to build per square foot.

"There's been a lot of changes to our building code, which is really, really great for our environment," Tschritter said. "But with that comes an expense to building. Also, we live in a very sought-after community so land costs money, trades costs money, all the materials to build a home costs money."

Grainger's home will be ready in about a year's time. In addition to leaving a smaller footprint on the environment and paying less in utility bills, she's also looking forward to fewer house chores.

By accepting you will be accessing a service provided by a third-party external to https://littlehouseco.com/